But the God of ALL GRACE, who hath called us unto his eternal glory by Christ Jesus, after that ye have suffered a while, make you perfect, stablish, strengthen, settle you.  I Peter 5:10 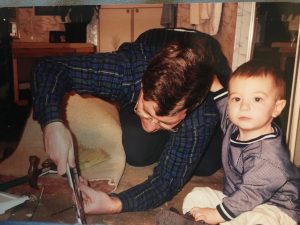 Todd and I had been married for five years before we had children.  By this point, we had started wondering if we should adopt.  We thought maybe we never would have a child otherwise.  We went through steps to do foster care, completing the class.  We were waiting to complete our home study when it seemed that we were forcing a door that God didn’t want us to go through.  We backed out of foster care plans, and within a few months we found out that we were expecting.  My mother-in-law told us happily, “You’re not getting any younger.  (We were in our thirties.) The world is not getting any better, and God is good.” 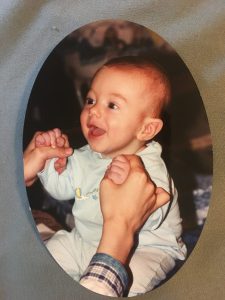 I was excited but nervous.  After dabbling around taking college classes in the evenings and the summers to get his teaching degree, Todd had decided that he would take a sabbatical from teaching.  He would take a full schedule of college classes, so that he could finish and get back in the classroom.  I was working as the secretary/bookkeeper at Independence Bible School (a job I dearly loved), and my income must support us until he was finished.  And then we had found out that I was expecting.  I’m a planner, but I couldn’t see the future of this one.  Could I keep on supporting us?  How would I do this with a baby?  Would we have enough money?

It was June, so the school was deserted.  I went to my office to work on the school bookkeeping that went on year-round.  I walked around the empty halls pouring out my heart to God.  Instantly my heart had peace.  I had assurance from God that everything was going to be all right.  He was going to take care of us.  Every day that week, I watched things happen, even groceries brought to our house.  We weren’t desperate for groceries right then, but I knew what God was saying.  It was a sign.  He was telling me materialistically, “I’m going to take care of you!”

By July, I was overwhelmed again.  Driving through the park and seeing the Fourth of July celebrations taking place had concerned me.  It seemed that the whole world was going a different direction than I was going, and I was going to ask this child, who was still unborn, to live differently.  I was asking this child to take God’s way and go upstream like a salmon—upstream against everything he saw, everything all around him!  It was overwhelming!  I thought, “What am I doing bringing a child into this world?”

One day, praying at the end of fellowship meeting, I was still telling God about this burden I had been feeling.  All of a sudden, God showed me a picture of lots and lots of grace!  My child (Samuel) did not need to barely scrape by; there was so much grace that he could swim in it!  There was an abundance.

Samuel is eighteen now, and there have been bumps on his spiritual journey.  It has been painful to watch him have to find his way even though he has a heart after God.  How many times have I come back to God and told Him, “You told me that you had ALL the grace that Samuel needed?  I’m here to collect, Lord!”

It is my prayer that my children will see “Him who is invisible.”  That the unseen things will be more important than everything they see around them!  One thing I know, because God told me…He has all the grace.  ALL THE GRACE!

By faith Moses, when he was come to years, refused to be called the son of Pharaoh’s daughter;  Choosing rather to suffer affliction with the people of  God, than to enjoy the pleasures of sin for a season; Esteeming the reproach of Christ greater riches than the treasures in Egypt:  for he had respect unto the recompence of the reward.  By faith he forsook Egypt, not fearing the wrath of the king: for he endured, as seeing him who is invisible.  Hebrews 11:24-27