And No One Knew…

It had been a stressful experience.  I had done the prep work for summer vacation Bible schools before, so it shouldn’t have been hard.  But this time was different.  I now had two young children who had changed my world.  I threw myself into putting my lessons together and making the visuals while keeping track of my two children who were both under three.  I had been hyper focusing on my preparations when I came back to reality and realized that Samuel was on the loose! 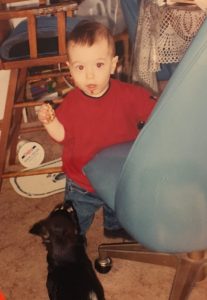 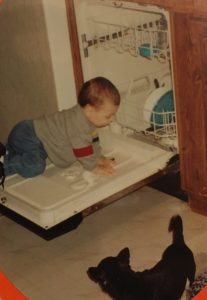 He had been in the bathroom and had been playing in the toilet water.  Then he had gone into the kitchen and made a mess.  Earlier, I had fed everyone a snack of cottage cheese and had left the container on the countertop.  While I had been occupied, Samuel had taken huge spoonfuls of cottage cheese and thumped them on our chihuahua Levi, decorating his back.  Then he had scraped some of it from the dog and put it back in the container.  I stood in the room with wide eyes, looking at the floor, dog, and countertop mixed with dog hair and cottage cheese.

I really respect those Michael Pearl followers who always know the correct childrearing response.  But sometimes MY response has been like a deer in headlights.  I felt like I was unable to punish my child over a technicality.  See, I had never told him not to decorate the dog with cottage cheese.  So how could I punish him?  Later, one of my sisters (Glenda) told me that she didn’t play those games.  She said, “I would have spanked him because I would have thought that he knew better.”

Really, I was trying to get out of motherhood at that moment, and Samuel missed the whole point.  He got tickled, like we were playing a fun, new game.  “Hee hee,” he laughed.  “Who are you?  Bro. Todd?”

Of course, I cleaned up the mess and went on being a mother!  Other people might make the whole thing look easy.  They might have twelve children while completing their master’s degree and working two full-time jobs. (Maybe I’m exaggerating, but you get the point.)  Other people could work from home, but I was struggling with getting my vacation Bible school materials together while my preschool children were into everything I did.  I started to feel like I was in one of those dreams where you are running away from a bad guy, but you can hardly move!  For days I struggled, but no one knew.

It was during one of my times in vacation Bible school prep that I cried out to God, “I need help!”

Suddenly a car pulled into my driveway, and a cheery voice was at the door.  “We’re here!” Grandma Vera called out.  “We’re here to get the children and take them with us.  Grandpa’s waiting in the car.” 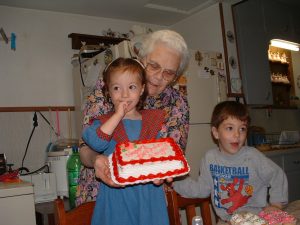 This precious older couple in my church weren’t really our grandma and grandpa by blood, but we had adopted them.  My husband’s parents and grandmother, at that time, were living two hours away, and my family lived three states away.  You might say that it was coincidence that when I prayed, the Henrys showed up.  I say God sent them.  No one else knew where I was emotionally, but God did.  And as a father pitieth His children, so the Lord pitieth them that love Him.

There have been moments in the past twenty-five years when I have had needs.  Times when I was not doing well spiritually, and I felt I was on the way out.  And no one knew.  No one knew how badly I was struggling in different situations.  I remember asking God, “Would you please put me on someone’s heart for prayer?”  I was desperate and hoped that someone somewhere was praying.

I want to follow the Spirit.  Today as I am praying, I want to linger where God leads.  He knows who may be hiding behind a smile.  He knows my loved ones who may feel they are on the way out, and no one knows.  He knows whose driveway to send me.

Oh my brother when I’m weak

Would you stand in stead for me

Sometimes a wall of grace

Sometimes a wall of faith

Other times it’s sweet mercy that I need

But the one for which I long

It makes all the others strong

I need a wall of prayer surrounding me