Are you on the steps?

My church wants revival.  We want an outpouring of the Holy Spirit.  My pastor, Bro. Johnny, had a message from God for us Sunday morning.  Can I share it with you?

My pastor has wanted to see the fire of God.  The Lord told him, “You’ve gotten the cart before the horse.  We talk about wanting a Pentecostal experience, but we’re going to have to have an upper room experience first.”

The sequence in the book of Acts was that first they were in the upper room in one accord and one place.

The early church got the promise, “Go and tarry in Jerusalem until you be endued with power from on high.” This power enabled them to do the work the way that God wanted them to do it.

The five hundred who got this promise had seen God work among them.  Why didn’t all of them go to the upper room?  They had a promise.  They were spiritual people, people that Jesus revealed himself to.  They wanted God and loved Jesus.

But there was a smaller group out of that church who said, “We want the baptism more than we want anything else.”  This smaller group went to the upper room.  They had to climb.

God told Bro. Johnny that the upper room meant that it was elevated; it was above where many people usually live.

When we got sanctified, we left things aside, put off things, took God’s way, and we got higher.  Things of the world got smaller.  We climbed up.

These people in the book of Acts had an upper room experience.  But after the Holy Ghost fell and they went back to living on the ground, they didn’t lose their one accord.  Later it says, “They were in the temple in one accord.”  What it took to get in the upper room, it took in the temple. 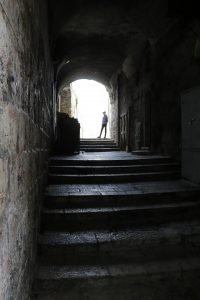 Peter said, “You know, I walked on water, and no one else did…but it really doesn’t make any difference.  I need God as much as any of them do.”

Then he left that water walking right there on that step.

Another one took a step and thought, “Peter walked on water, but you know he sunk.”  They took another step and said, “But it doesn’t make any difference.  I didn’t even have the nerve to get out of the boat.  I need God as much as Peter does.”

Martha may have thought, “You know I tried to do more for Jesus than Mary ever did.”

There was probably a thought in Mary’s head, “You know I sat at His feet, and all Martha wanted to do was work, work, work.”

But both of them left it on the steps.  If we get to the upper room, we’re going to leave a lot of stuff behind.

Remember the nerve of that woman who went to Jesus and wanted her sons to sit one on the left hand and one on the right hand?  Someone on the way up laid that right there on the step.  And they thought, “It really doesn’t matter because I need God more than I need anything else.”

There are a lot of things that don’t matter if we want to get up in the upper room, and if we want a baptism by the Holy Ghost then we have to have an upper room experience.

Misunderstanding.  Leave him on the steps.

I don’t care if you’re right or wrong.  I want to be where God wants me.

You come to church and maybe someone at church didn’t do like you thought they ought to.  Step up, brother.

If I can get in the upper room, I have enough confidence…I have enough faith…in my God in heaven that the Pentecostal blessing’s coming.

Don’t shy away from the stairs.  That’s the only way you can get to the upper room.

These all continued with one accord in prayer and supplication, with the women, and Mary the mother of Jesus, and with his brethren.  Acts 1:14

And when the day of Pentecost was fully come, they were all with one accord in one place.