It had been a long day.

I had already been in Mexico for a week and had only a couple more days before my plane was to fly out. We had left that morning from San Cristobal de las Casas, Chiapas, Mexico and were hoping to make it to Villahermosa, Tabasco, Mexico before it got any later. It was going on midnight hours, and I laid sprawled out on the backseat of our blue Ford Aerostar minivan that was over thirty years old. The speed bumps that appeared every mile or so made the the car trip even more bumpy.

Looking at the road ahead, suddenly my heart sank. I saw the figures all dressed in navy and black with flashlights and automatic rifles. 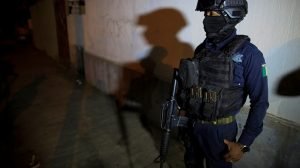 They were making cars stop. Within a split second, I surmised that we would be questioned or searched or both. With my limited Spanish and my very white skin, being an American from the United States would not play to my advantage in this situation.

So within that split second, I came to the conclusion for a solution. No fright. No fight. Just flight.

Quickly, I ducked down and slumped over in my seat, pretending to be asleep. Within a couple minutes, I heard the stern, questioning voices.

The police wanted to know where we were headed. They asked my cousin’s husband—who was driving—to show his license. They were very fascinated to learn that most of us in the van were from the United States.

As the 20-questions game continued in the front, other armed figures walked around the vehicle, shining their flashlights through the windows. The American opossum squeezed her eyes tighter trying to look as asleep as possible. Concerned, the police questioned my cousin and her husband and asked if I were okay.

“She’s just tired,” was their response.

With much hesitation, God gave wisdom to my cousin and her husband, and we were able to pass the checkpoint without paying any bribes or getting searched.

Later, my cousin’s husband asked me, “Were you scared?”

“No, not really,” I responded, “I just didn’t want to have to talk to the police.” 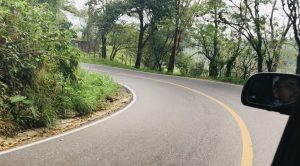 So many of us might be slumped down in the backseat of our little van. Traveling down the dark road of life.

God is faithful. Many times He’s set up checkpoints in our lives—days of visitation.

He stops our cars, shines His light into our hearts. But sometimes we think it might just be easiest to continue on our way or just pretend we’re asleep and ignore His pleadings.

We might be right with God, but He might have put His finger on something in our lives that needs to change.

Will we make up excuses until we get past His checkpoint? Will we feel all concerned in the moment, but soon forget the urgency of things as the cares of this life spring up?

You might be facing circumstances in your life right now that are pulling you to do something about your spiritual state. Are you concerned? Are you scared?

May your answer not be, “No, not really. I just don’t want to have to make any major decisions about my spiritual walk right now.”

“For the Son of man is come to seek and to save that which was lost.” ‭‭Luke‬ ‭19:10‬

“To day if ye will hear his voice, harden not your hearts, as in the provocation.” ‭‭Hebrews‬ ‭3:15‬