Abigail had gotten her passport and was ready to go.  When the opportunity came to go to Mexico where her cousins were going to be, she was thrilled at the chance.  To our amazement, she was able to purchase the ticket to southern Mexico with three connecting flights for less money than she had spent when she went to Pennsylvania.  Amazing!

She spent time gathering information of what was allowed.  She decided a new suitcase and backpack were in order.  She packed these in detail…with so much thought going into each part of her trip.  She had snacks for the trip, her identification, her iPad, and more!  We planned how she was going to get to Kansas City, even reserving a motel room there.  Everything was going according to plan. 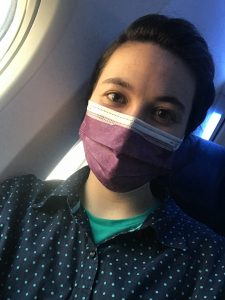 I checked in with the happy thought that I didn’t have to get up at four in the morning and take her to an unknown Kansas City airport since the motel offered a shuttle.  I could actually sleep a little longer before I got up to enjoy a day in Kansas City with my younger two children.

A couple hours later when I finally woke up and made contact with Abigail, she was frantic.  “Pray that I make it to my gate in time!” she panted.

“What?!” I asked, suddenly alarmed and now fully awake.

“My plane leaves in a few minutes, and it will be a miracle if I can make it!”

She hung up, and I could feel myself falling apart.  My eighteen year old was in Minneapolis/St. Paul airport by herself, lost and possibly missing her flight, and there was not A THING I could do about it!  I felt so powerless!

She called back to tell me that sure enough, she had missed her flight.

It seems that when she got on the plane in Kansas City, there had not been enough room for everyone’s carry-ons, so the flight attendants began tagging them and putting them underneath with the checked-in luggage.  This wasn’t terribly unusual.  We’ve had that scenario before.  However, before when this happened, we picked up our carry-ons as we left the plane.

Abigail did not see her carry-on as she disembarked.  The copilot, standing there, told her to go to baggage claim to get it.  So, Abigail had headed to the baggage claim there in St. Paul/Minneapolis.  She arrived at baggage claim carousel 8 and walked around it probably four times before she got in a line to talk to airport personnel.  When it was finally her turn, they looked at her ticket/itinerary and told her that her luggage was NOT at the carousel.  Since she had a connecting flight, the luggage was already transferred to her next plane and was not, like the co-pilot had erroneously said, at baggage claim.

Now, Abigail realized that precious minutes had been ticking by.  She was desperate to get to her next gate.  But since she was at baggage claim, she would be forced to go back through security check and wait in line with arrivals!  To her horror, she looked up to see the LONGEST LINE SHE HAD EVER SEEN!  The line snaked out of the normal room and into the foyer.  She looked at the time…thirty minutes until departure.

Nervously, she told the ladies in line behind her when her plane was leaving.  They suggested that maybe she could ask people if she could cut the line.  To her relief, the TSA pre-check let her cut the line and get through faster.

After getting through security, she was then running with her duffle bag on her shoulder…up escalators…down hallways…trying to follow airport signs to find her gate.

She arrived at the gate that was printed on the ticket, but she found that at the last minute, they had changed the gate.  The new gate was down yet another hallway.

At this point, she was in full gallop!  She raced into the seating area, which was now vacant, as the Delta attendant was on the phone.  As Abigail came to a halt, he was hanging up.  “Where were you?  We’ve been paging you this whole entire time!  They just closed the doors to the plane!  Let me see if they will open them.”  He dialed again, but they said that it would be too much trouble.

She was three minutes too late!

This jolly black man was so comforting.  He led Abigail to customer service phones where she could explain her problem to a company hotline.  Somewhere about this time is when I talked to Abigail again and found out that she had for sure missed her flight.

I want to give her credit, even though she was alone and confused, she did not fall apart.  I wish I could say the same for her mom who was powerless to help in Kansas City.

Abigail told me that even though they were paging, “Abeegail Hameelton, dis is your last call,” (in almost an island accent), she never heard it.  She wasn’t close enough.  There were so many sounds that could have drowned out that voice.

Thank the Lord, by adding an extra flight to Los Angelos and an overnight layover in Mexico City (which the thought of THAT petrified her dad!), they were able to change her itinerary to catch a flight to Villahermosa and get to her cousins.

And her cousins “just happened” to know a family near Mexico City who lived fifteen minutes from the airport and spoke English.  They came and got her for the night and brought her back the next morning for her final flight!  God is good! 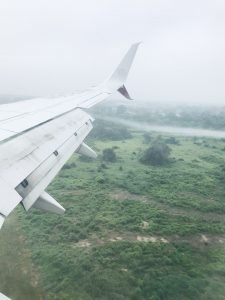 At our church’s next service, my husband got up and talked about the sadness of having a seat reserved with your name on it and missing your flight!  After all the preparation and effort…and missing it!  That’s not something we want to do.

You see, years ago, I said goodbye to a lot of things.  I packed my bags.  I left things behind.  I made preparations.  I started out to make it all the way.

But I don’t want to get confused by anyone pointing me in the wrong direction.  I don’t want to get so far away that I can’t hear the call to board.  I’m living in one loud airport with confusion and voices all around.  Am I close enough to hear my name?  This is what I have lived my life for.  I don’t want to get distracted and confused…and miss my final leg of the journey!  This itinerary can’t be changed.

When the Savior calls, I will answer

When He calls for me I will hear

When the Savior calls I will answer

I’ll be somewhere listening for my name