Today I had lunch with a friend.  I told her that the things that we don’t write down or tell, we tend to forget.  (That’s why it’s important to testify.)  Then, I went on to tell her the story of how God had worked for me in getting my house.  She asked, “Have you written this down?”  I’m not sure that I have, so could I testify to you today?

Twenty-five years ago, we moved to Independence, Kansas.  We arrived from our honeymoon on a Sunday afternoon, and I started teaching at the Bible school that week.  We lived in staff housing on the Bible Holiness campground.  It was a great thing for newlyweds.  We had no gas bill, electric bill, water bill, or rent.

It was a tiny place…I could plug in the vacuum and sweep the whole house without having to unplug!  But it was a great way to start out our life together!

Sometime during our second year, I realized that teaching 7th-8th graders (the current job) was not my life calling.  We started looking for a place to move into, since I would not be a teacher the next year and wouldn’t be using the staff housing.

A local realtor showed us house after house.  We struggled to find where God wanted us to be and what jobs He wanted us to do.

Todd applied to work at Cessna and was turned down.  We felt in limbo.  What was the next step?

Finally, we saw an advertisement for a double-wide trailer.  Next door to our church was an empty lot.  We started to get excited about the prospects of buying the double wide and moving it next to the church.  Previously, I had lived for three years next to the church when I was a single teacher in the little ACE school in Indiana, and I had loved the location.  Going over and praying in the empty church had fed my soul.  The thoughts of being next door to a church felt like coming home.

We went to our bank to see about getting a loan to make all this happen, and we were denied!  They said that we did not make enough money.  They weren’t willing to take the chance on us.  We went to another bank.  We were denied.  A credit union.  Denied again.  I don’t remember how many places now that refused to loan us money…maybe four or five.

We were feeling frustrated, but we tried one more bank—First Oak Bank.  We went in and laid out our case to the loan officer, Tracy Oaks.  Come to find out, she was the bank president’s wife.  She ushered us down the hall and right into her husband’s office.  “Brad,” she told him, “these people don’t make a lot of money each month, but they have no debt.”  We didn’t have school loans to pay back, car loans…nothing.  For the first time, someone took the time to look at the whole picture of our life, and not just how much money my Bible school pay and Todd’s self-employment came to.

The Oaks gave us the chance to be homeowners.  When I sat down with Tracy to fill out papers, I told her all about myself.  I told her, “I’ll be quitting teaching after May.”

“No! No!  I didn’t hear you say that,” she said.  I had no idea that when you are getting a house loan, you aren’t supposed to tell them that you are quitting your job.  Not when you are considered high risk anyway.

Tracy and I discussed how I had cleaned houses to put myself through college.  She said, “You know, my housecleaner is quitting.  Would you like to clean my house?”

I told her that I would be very interested in cleaning for her.  “Well actually,” she said, “my housecleaner had a whole lineup of houses.” Tracy thought that the old housecleaner may be thrilled to have someone to refer all of her previous customers to.

She was right.  The woman was happy to meet me.  She referred all of her people to me, and several of them became my customers immediately.  I did not put ads in the paper.  I did not go job hunting.  I did nothing, but when my last day of teaching was over that year, a whole lineup of houses to clean had fallen in my lap!  I think God blocked all the other banks, so that I could meet Tracy Oaks.

I still was frustrated though because I thought the red tape of the loan was taking a long time to go through.  I was antsy and impatient.  Looking back, it seems like it took weeks to get approved so that we could start.  I was ready to move the home on the property and get moved in, and it took sooooo long!

I felt like God was saying, “Calm down, Elizabeth.  I have everything under control.  I need you to relax!”

We moved that summer, and Todd’s jobs did not materialize.  What did we live on?  Well you see, I had these housecleaning jobs that were supporting us.  It was our only income.

Later, Todd would go back to college for his teaching degree and spend around twenty years teaching.  By that fall, I would begin working in the school office, but those housecleaning clients were what I needed for that summer. And God literally gave me all of it!  My income, my house, my location…all of it from Him as part of His plan. 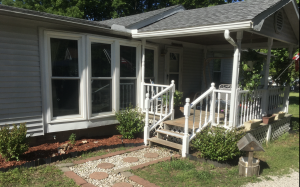 This is really good for me to remember.  Once again (I know I have said this over and over in this blog), I can trust Jesus!  I don’t have to have an agenda.  I don’t have to work things out.

I have four teenagers, and things are coming up like where they should work…where they should live…what is the next step.  Many times, I don’t have any other answers, but…follow Jesus.  He can give peace.  When we are tempted to get impatient, He may be working out our miracle.  I want to follow Him!

And he that searcheth the hearts knoweth what is the mind of the Spirit, because he maketh intercession for the saints according to the will of God.  And we know that all things work together for good to them that love God, to them who are the called according to his purpose.  Romans 8:27-28