I think one of my favorite stories that I read my children from the Christian Heroes:  Then & Now series by Janet and Geoff Benge was Jacob Deshazer:  Forgive Your Enemies.

Jacob had been raised in a Christian home, but he had turned his back on his upbringing.  He ran away from everything he heard in campmeeting and church services.  When he thought that he may end up being drafted into World War II, he decided to sign up on his own so that he could choose what branch.  He was trained as a mechanic and bombardier. 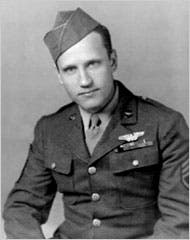 The United States soldiers were becoming angrier as the Japanese attacked Pearl Harbor and Germany sank civilian ships with their U-boats.  Jacob was one of the soldiers asked to join a secret mission.  He and the others were told that the mission would be extremely dangerous.  They all agreed not knowing much about the assignment.  Later, they found out that the man in charge, Jimmy Doolittle, had come up with an audacious plan to outfit planes with bombs, have them take off from an aircraft carrier, and make an attack on Japan.

The plane that Jacob was assigned to was damaged during takeoff, and the fuel did not go as far as planned.  The crew dropped their bombs on Japan but ran out of fuel before they got to safety.  The five crewmen who had been on the plane were captured by the Japanese.

They were beat, tortured, and almost starved.  After two years in the prison camp, Bob, one of the crewmen, had gotten down to about eighty pounds.  When Bob died, Jacob wondered how “even Jesus, could dare to suggest that a person should love his enemies when his enemies were starving good men to death.” (Page 124-125)

Conditions improved after Bob’s death, and the prisoners were even given books to read.  They would each take a book and keep it, then pass it on to the others.  After nine weeks of waiting his turn, Jacob was given the chance to read…the Bible—this same book that he had thought irrelevant and had turned his back on as a young person.  But now in solitary confinement, he devoured the book.  For the three weeks that he had the Bible, he read it, he memorized passages in it, but most important, he was saved.  An amazing joy filled his heart!  He was still in prison, but everything had changed.

He got an opportunity to show this when a guard slammed Jacob’s bare foot in the door.  Instead of anger and bitterness, God helped Jacob want something other than revenge.  He ended up having a friendship with that same guard.

Eventually, the war was over, and the surviving prisoners made it home to America.  Jacob went on to Bible college.  God called him to be a missionary in Japan, the land of many bad memories for him.  For years, he had a fruitful ministry in Japan and America with the Free Methodist Church.

Toward the end of Jacob’s life, he got Parkinson’s disease and dementia.  He was no longer able to hold much of a conversation.  One time, his pastor wondered what memories Jacob still had.  He asked him if he remembered when he had been a prisoner of war in Japan.

Questioning, Jacob turned to his wife, “Was I a prisoner of war?”

His wife assured him that he had been in a Japanese prison camp for three years.  Jacob remained perplexed and confused as his pastor continued to question him.

His pastor asked, “Do you remember being a missionary in Japan?”

Suddenly, Jacob’s face brightened.  He said, “Yes!  The whole family was over there.  We began churches around the country.  How I love the Japanese people!”

Gone were all the memories of the prison of war camp and the mistreatment.  All that was left were the warm feelings of closeness between him and the Japanese people.

What an amazing example of forgiveness through the power of the gospel of Jesus Christ!  As Janet and Geoff Benge wrote, “He had taken forty terrible months of his life and turned them into a life of triumph over hatred and bitterness.”

Isn’t that just like something that only our God can do?

But I say unto you, Love your enemies, bless them that curse you, do good to them that hate you, and pray for them which despitefully use you, and persecute you; Matthew 5:44

His power can make you what you ought to be

His blood can cleanse your heart and make you free

His love can fill your soul and you will see

‘Twas best for Him to have His way with Thee