How Big Is Your God?

Years ago, my friend Doreen was visiting at my house when her young son, Timothy, needed to go to the bathroom.  We then got deep in conversation in the living room, and both of us forgot about Timothy, not paying attention to the fact that he had not come back. Finally, we heard a racket, and we ran toward the bathroom to see what was wrong.

Petrified, Timothy was yelling for help.  It took a while for me to figure out what was happening.  Timothy thought he was trapped in the bathroom.  A huge Doberman pinscher had him cornered!  He could hear his mom in the living room, oblivious to his distress as this ferocious dog stood guard outside the door!

Timothy and I have talked this over for the past eighteen years.  He still remembers his terror.  I still remember my amazement.  You see, I have never owned a Doberman pinscher.  All I had was Levi, my cute, lovable little chihuahua.  The family dog who was safe with toddlers and infants… and young boys in elementary school.  But Timothy didn’t know that.  His fear had clouded the actual circumstances.

Last February, I saw circumstances clouded again. I came outside to see what my son Logan had done with a few inches of snow.  (In southeast Kansas, if you are going to do anything with snow, you must do it quickly!  Most of the snow we get seems to disappear within hours.) 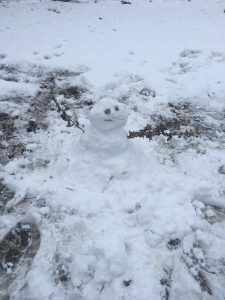 There in my yard was a nice snowman.  I zoomed in to get a closeup picture, chuckling to myself.  I knew that if I showed anyone the picture, they wouldn’t get the context unless I took it again, forcing the neighbor’s cat to be in the picture.  You see, the snowman was only about a foot tall! 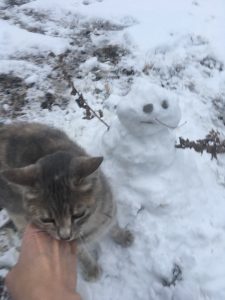 My niece Angelica said that she started to tell me that I had a monster cat, but really it was a matter of the point of view.

I can look at my problems with and without God.  I have to put things in proper perspective!  What I think is so large, does not loom as huge when God is there.

There are things that the enemy has blown totally out of proportion.  He has delighted in my overwhelmed anxiety.  There have been times when all I could see was the enemy like Elisha’s servant, until Elisha asked the Lord to open his eyes.  Times when I was paralyzed with fear, stuck inside the “bathroom” when God wanted me to look to Him for victory!

I’ve watched my mother-in-law at campmeeting when faced with unanswered prayers and loved ones in distress as God opened her eyes and showed her that He was bigger!  It was a scene that I never will forget as she ran and shouted, saying, “He’s bigger!  He’s bigger!  He’s BIGGER!”

I want to measure the size of the dog next to my God!