I Must Make It!

A few weeks ago, a five-hundred-year flood came to Hanging Lakes area in Colorado.  I’m glad that Todd and I went when we did.

We got married in 1996 and went on a honeymoon to Colorado…Durango train, Estes Park, Colorado Springs, and more.  It really was a fast-paced trip.  We always said that we would go back…maybe for our anniversary.

Then twenty years went by before we returned.

Five years ago, we just happened to be in Colorado doing a vacation Bible school.  We decided to do something for our anniversary while we were already there.  After the vacation Bible school, we left our four children with my best friend Kim Sayler and got away for day and a half. 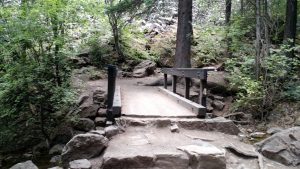 We heard about a gorgeous place called Hanging Lakes, and it seemed like a good idea to celebrate our twentieth.  A travel guide said that it was so beautiful that they could almost imagine a unicorn getting ready to come out.

Todd and I spent the night in a nearby hotel knowing that this was probably our one chance to hike to Hanging Lakes.

We were horrified when we got to the park the next morning, and it was full!  We didn’t even know that happened in places.  The rangers would not let us or any more vehicles into the place.  We felt almost devastated.  We had waited so long for a Colorado getaway.  It didn’t work out for us to merely come back the next day.

Finally, one of the rangers told us, “If you will come back later, sometimes this place clears out.  You can probably hike late afternoon.”

Sure enough, a few hours later, we were able to get in the park.  We headed up the path to the mountain.

Hiking was something we had done on our honeymoon.  We just weren’t in as good of shape as twenty years earlier. 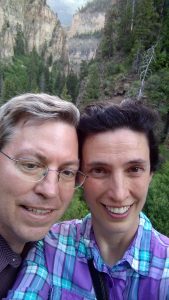 Hanging Lake path, at the time, was a 1.2 mile trek, passing seven bridges.  It was known to be “steep, rigorous and rocky but rewarding.” (visitglenwood.com) The path followed the brook, so off and on, we could hear the water.  The scenery, the sounds, and the whole atmosphere was fabulous.

However, Todd had been having physical problems.  With the physical exertion and the hot summer sun, he was losing strength fast.  We hiked for quite a while when Todd wasn’t sure that he could do it anymore.  I sat, watching him.  He and I drank some water, and Todd wearily continued.

Since we were getting such a late start, there started to be a trickle of people coming back down from the top.  They would see us struggling and breathing heavily.  “Keep going!” they would call out cheerfully.  “It’s worth it at the top!”

We got back up and headed up the path.  Todd’s feet were shuffling along.  “I don’t think I can do it, Elizabeth,” he panted.

I couldn’t imagine.  We had come so far already!  How could we give up then?  Todd and I took another rest.

This time when he got up, I got behind him.  I began pushing him up the mountain.  If the only way he could make it was with my help, that was fine.   I was determined that we were going to the top!

Finally, the message changed from the people coming down the mountain.  “You don’t have much longer,” they said, “but the hardest part of the trail is coming up.  It’s steep.”

They weren’t kidding!  It was rough and intense.  But some of the people going by us on their way down were old…much older than Todd and me.  And some had little children.  However, the icing on the cake was when a man with a cast on his leg and crutches went by!

And we did it.  We made it up that last rough, steep trail.  With the physical condition that Todd had been in, I felt like we had clawed our way to the top.  We finally rounded the final bend to arrive at the very top of Hanging Lakes.

I had been hearing multiple reports from all the people who passed us on their way down, but I still wasn’t prepared for what I saw.  It was one of the most beautiful places I had ever seen in my entire life!  Pictures had not done it justice.  Todd and I stood there, probably with our mouths open. 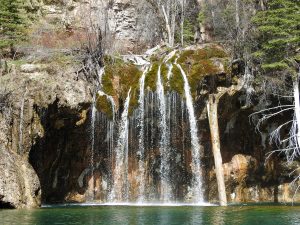 I don’t know how to explain this, but it seemed like I had just made it home to heaven.  The amazing thing was that we were no longer tired.  Whatever had been wrong with Todd, in an instant, was completely gone!

We have never gotten over the whole experience.

There have been times I felt like I was spiritually pushing a loved one up the mountain with me.  Then there have been other times when I was the one being pushed!

We can rest and get our bearings, but there is no place to turn around.  The top is worth it!  Even if the most difficult, steepest part of the trail is ahead, I have to make it!  I must!

One of these days, we will go around the last bend, and even though we have heard about this repeatedly, we will still be surprised.  It will still take our breath away.

I think I will cry.

And my life becomes an endless dream

When my fight against the world and sin

Seems a lonely road without an end

Then I remember that I’m nearing home

And then those gates will open wide

And I’ll step inside

Robed in white with my harp and my crown

So when I’m bent beneath some load of care

Just remind me that I’m almost there

And let us not be weary in well doing: for in due season we shall reap, if we faint not.  Galatians 6:9 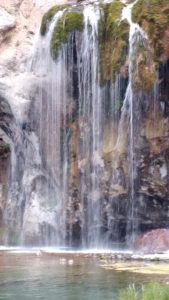