I’ll Help You if You Let Me

When my husband, Todd, was almost two years old in 1970, his baby brother Brent was born.  When Brent was six weeks old, my mother-in-law noticed that something was wrong with him.  He did not want to eat and did not act right.  My in-laws took him to the doctor who sent him to the hospital, but the doctors could not figure out what was wrong.  They did all they knew to do for him, but Brent passed away in the hospital shortly later. 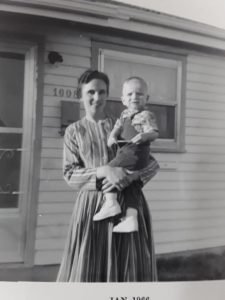 Mom was overcome with grief.  She had come through so much in her life.  Her father had passed away when she was thirteen.  Then, her mother had a nervous breakdown from the stress.  Many nights Mom secretly cried in the night, but she didn’t want to add stress to her mother by letting her know.  During that time, Mom learned to be the rock for the family, even though she was a young teenager.  She held the family together.

For the next few years, Mom, her brother, and her mom moved multiple times—living with relatives and on their own.  Changing school districts while still dealing with the aftermath of her father’s death was difficult.  But everywhere she went, God sent her a friend to help her make it.

Then, when she was fifteen, God Himself became her friend.  She got saved at a campmeeting in Oregon.  It was like someone had pulled the shades up in a dark room, letting in the light; God put a song where she had been carrying sadness since the death of her father.

After she got saved, she walked faithfully with God for years, but now her baby was gone, and she could not seem to get out of the depression.

She had a few pictures of Brent in undeveloped film on top of the piano.  To everyone’s horror, they found Todd on the piano, something that he had never done before!  He had crawled up and grabbed the film, opening and exposing it.  In that one moment, Mom lost her only pictures of her baby.

She went through the motions of taking care of her two boys, Arlen and Todd, but her heart was broken.  As she was combing her hair getting ready one day, from the upper-right corner of the bathroom, she heard God speak in an audible voice saying, “I’ll help you if you let me.”

That day, Mom decided that she was going to let God!  She didn’t always know how to do what she needed to do or which way to turn, but she made a conscious decision to let God help!

God took her through her grief and gave her even more spiritual strength.

When Todd’s second birthday came in July, friends in the church, Nellie and Sue Kimmel, took over.  They got a cake and planned a party, becoming Todd’s “adopted” family.  Even this was part of God’s provisions and help.  Mom could have rejected the help and withdrawn herself from those God wanted to send to her.  She could have stopped going to church.  She could have isolated herself.  It was her choice to accept the help.

For years, I have heard Mom say over and over, “He told me that He would help me if I’d let Him!”

Will you let Him?

When through the deep waters I call thee to go

The rivers of sorrow shall not overflow

For I will be with thee, thy trials to bless

And sanctify to thee thy deepest distress

When through fiery trials thy pathway shall lie

My grace all sufficient shall be thy supply

The flame shall not hurt thee;

Thy dross to consume and thy gold to refine