I beseech you therefore, brethren, by the mercies of God, that ye present your bodies a living sacrifice, holy, acceptable unto God, which is your reasonable service. Romans 12:1

A couple of weeks ago, my father-in-law was scheduled for testing in Tulsa. I thought that it would work for me to take my in-laws, since my mother-in-law does not drive in Tulsa. To make it in time, I was out of bed before 3 o’clock in the morning. The plan was to meet halfway in Bartlesville, and I could drive them to their appointment. I figured that I could be back in Bartlesville in time for me to go to work, letting them drive back home by themselves once they were on the familiar road.

I totally did not understand the involvement of the testing taking place that day. Somehow it had not registered with me that they were going to put my father-in-law out for this procedure where they would go down his throat to check out his heart. (Medical things have not been my strength.) This was way more involved than I was thinking–not like simple blood work that merely took an hour. I had gotten confused because when the doctor scheduled this, he had explained why he wanted them there at 5:30 in the morning. He had told them that he wanted the testing out of the way before his normal office hours. To me that meant that it would be a quick procedure.

Since I could not go in with them, I sat in the parking lot. Unfortunately, I did not bring my phone charger or my computer to do work, thinking this would be short. I was scheduled to be at work in Bartlesville at 7:30 a.m. It was simply not possible! It was a cold morning, but I found that by turning on the car and using the heater every few minutes, I could warm things up. Then I could turn it off in between times.

After about four hours, I was able to pick up my in-laws. The procedure was done, and now my mother-in-law wanted to get me back to Bartlesville as quickly as possible so I could go to work. Sadly, as she had sat in the hospital with Dad, she had been feeling some pressure. She realized that it was taking longer than we had thought.

My father-in-law had not been able to eat before the procedure, and he was now starved. He had his taste buds set on McDonald’s breakfast. My mother-in-law wanted him to wait until we were out of Tulsa, so I wouldn’t be later.

I am not familiar with Tulsa, and none of us were positive where McDonald’s was. After getting lost, my mother-in-law tried to get Dad to give up the idea. I did not verbalize it to her, but I thought that anyone who had just had a tube down his throat and had gone through that procedure, I was going to make sure he ate whatever he was hankering for! Whether it was convenient or not! I felt a little protective like I would have if it would have been one of my children or my husband. This is my father-in-law…the one I call Dad.

My mother-in-law explained to me that they wanted to pay me for my time in taking them to Tulsa to see the doctor. There was absolutely NO WAY that I was willing to accept that money! What I had done was my reasonable service!

Twenty-four years ago when I got married, that precious couple took me in. They could not have treated me any better than if I had been a daughter born to them! They deserve far more than I could ever repay them! It is my reasonable service! 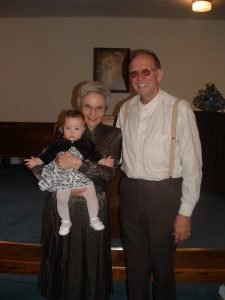 They have loved me, prayed for me, and helped in one thousand ways. I have had four premature babies. They let me move in with them and Grandma Filsinger in Wichita, where they lived at the time, to visit my babies.

Before my twins were born, I actually moved the whole family there. My in-laws helped me take care of my three and five-year-old children. My mother-in-law did our laundry and helped in every way possible. She cooked our food, did the dishes, and cleaned up after us. I never paid her for her time. I was her daughter! She rearranged her whole life to include us! She replaced all her normal activities so that everything was centered around us. 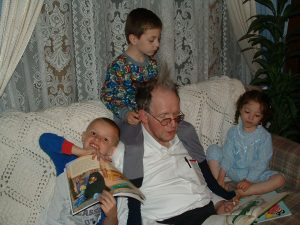 My down payment for my house? Borrowed from them. Thoughts for my curtains? They were right there. I cannot even count the ways. In a tight place? Call Mom. She has brought food, loaded my dishwasher, helped nurse back one of my babies with pneumonia, and carried me emotionally. Her kindness has amazed me. If I would tell her that I was going to take a nap, her only response would be, “Good! You probably need one!”

And she wanted to pay me for taking them to Tulsa?! It was my reasonable service! It was the very least that I could do! That measly little bit of giving that I did that morning was nothing after all the many things that they have done!

After getting Dad breakfast at McDonalds (where they even paid for my sandwich), I finally went to work. Later, when I headed home for the evening, God and I had a talk. I told Him about my in-laws and everything that they have done for me. Then I told Him that He had done FAR MORE for me than even this couple who have sacrificed so much for me down through the years! I asked Him to open my eyes to all the many, many things that He has done. He has loved me, helped me, brought light to my mind when it was clouded, and supported me! I want to remember and be aware. The very air that I breathe and the life that I have…all come from Him! He is the Creator of the universe. And what is giving Him a few hours of service in comparison? It is the very least that I can do. It is my reasonable service!

By that time, it was Wednesday night, and I was low on sleep. But how could I not go to church and pull, sing, and testify? It was my reasonable service! Such a small thing! If I could somehow give back some praise and service to the One Who has given His all for me!

Tell me not of heavy crosses,
Nor the burdens hard to bear,
For I found this great salvation
Makes each burden light appear;
And I love to follow Jesus,
Gladly counting all but dross,
Worldly honor all forsaking
For the glory of the cross

Oh! the cross has wondrous glory!
Oft I’ve proved this to be true,
When I’m in a way so narrow,
I can see a pathway through;
And how sweetly Jesus whispers,
“Take the cross, thou needs not fear,
For I’ve trod the way before thee,
And the glory lingers near.”
(Attributed to William Hunter 1811-1877)

This is the least that I can do. Flood my heart with the fact that You paid a debt that I could not pay, Lord. Anything that I do…I am still an unprofitable servant. This is my reasonable service!