When I got married and moved to Kansas, I found several of the pianists had a different style than what I had grown up with.  My mother-in-law was one of these.  My husband, Todd, calls it the “Kansas swing.” There are songs in our hymn book that I have never heard anyone play the way that she plays them.

We realized that my mother-in-law was getting closer to eighty years old, and we felt an urgency to record her playing the piano.  My husband and I hated to lose the opportunity to record some of her style.

A year and a half ago, my niece and nephew, Morganne and Bobby Pickett, were in town, recording as Nomad Studios.  Mom’s mind was distracted since she was in the throes of Dad’s physical problems.  They have dealt with a lot with his health…sepsis, a stroke, and surgeries.

But she was willing to come over and play some songs for us to record.  We thought we would come back later and add our family singing the vocals.

Then months and months went by, and the vocals never happened.

Finally, a few weeks ago in an amazing twist to life, Nomad Studios (Bobby, Morganne, and Merilee Barnard) was able to come back.  We would finally be able to record vocals and even add more songs that my son Samuel would do the accompaniment for. 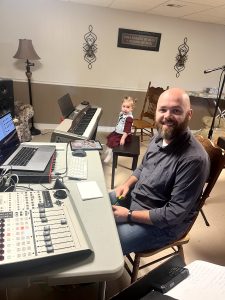 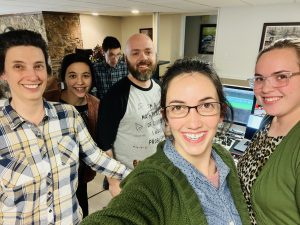 Two of these songs, I have sung together as a medley for over thirty years.  We could not get the second song of what my mother-in-law had played a year and a half ago to work out.

Piano is extremely hard to splice, and we did not know what to do.  Bobby told me that usually he can’t edit piano.

But amazingly, Bobby added a couple notes leading in and had Samuel play the second half.

It worked!  In fact, I would not be surprised if it worked so well that some people might listen to it and never know that we had just switched pianists midstream!

See, from the time that Samuel has been a little boy, he has grown up listening to his grandma play.  She has shaped a lot of his style!

At one point, my nephew and niece started laughing as they saw the computer screen with all the music tracks showing up.  We could see the chords in a visual way—which one was Nana’s and which one was Samuel’s.  But they had such definite similarities!

Samuel has been marked!  He’s been influenced.  He can keep in step.  The “Kansas swing” is in his mind.

He’s not an identical piano player, but he has been definitely influenced by the way he will hit certain bass notes, certain chords, the double time…His style has been affected.  He is not an Indiana player.  I raised him in Kansas, and he has been around his grandma for twenty-one years. 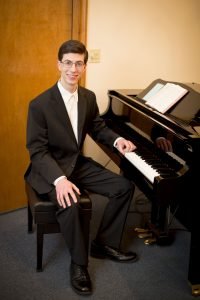 These years he has spent listening to her play.  Analyzing rhythm.  Sitting at the piano until he could figure out notes.

I need to spend time alone with God.  I want to keep in step.  I want His style to influence me.  I want His technique to be ringing in my ears.  His methods to be imprinted on my heart.  I want Him to fashion my approach.

I want to keep in step with His style.

Helping the helpless, cheering the fainting,

Seeking the wand’ring sinner to find.

Holy and harmless, patient and brave;

Willing to suffer, others to save.

Oh! To be like Thee, while I am pleading,

Pour out Thy Spirit, fill with Thy love,

Make me a temple meet for Thy dwelling,

Fit me for life and Heaven above.

Blessed Redeemer, pure as Thou art;

Stamp Thine own image deep on my heart.