Last week I got a chance to go to the annual Interchurch Holiness Convention in Gatlinburg, Tennessee. Many times, this has been a highlight in my year and a priority in my life. This year, most of my family could not go with me. It was just my daughter Abigail and me attending.

I had never traveled the road from Gatlinburg, Tennessee, to Independence, Kansas, so it was totally unfamiliar to me. However, I was not worried because I’m used to putting my destination into Google Maps on my phone and letting the GPS lead me. We’ve maneuvered all over the United States with this method, but this time although I could see the map on my phone…I wasn’t hearing the woman’s voice.

Even without the voice calling out directions, all went well. Well, until we got around Paducah, Kentucky. I didn’t know exactly what went wrong. Was it the same thing that happened on the way to Colorado camp last summer? There are places out in western Colorado that get no reception, and somewhere along the way when I briefly got service, my phone tried to reroute me. Then it couldn’t get enough of a signal and started giving me conflicting data! Have you ever been there spiritually? Lost and no clue how to get where you need to be? No idea where you are.

After a couple of times of getting off track last weekend coming home from Tennessee, it dawned on me that I wasn’t hearing the directions out loud, and I was missing my turns. My daughter began looking in my settings and found the problem. Somehow the directions were on silent…with bad results! 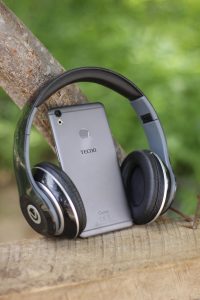 I thought about Lee Epp, a man in our church. He has a hearing loss and had worn hearing aids for years when he discovered a hearing device called Hear Phone. These are headphones that can be turned into hearing aids and attached to his phone. It works great unless you get too many feet away from your phone. This is one of the best hearing devices that he has used but sometimes with interesting results.

Ronny Hinson wrote, “I won’t ever drift so far from the shore I can’t hear what He has to say.”

I’ve had Google Maps make mistakes, and sometimes their routes have not been updated after changes. They have messed me up before–led me to dead ends and impossible places! But God has never done that. I can trust Him!

Today, I’ve put heaven in my GPS, and my heart is fixed! I want my device to stay connected. I want to make the turns that the Spirit wants me to make. I want to hear that Voice in my ear. I want to be in range. I have determined to clear whatever interference I need to clear so that I can hear His directions.

Being confident of this very thing, that he which hath begun a good work in you will perform it until the day of Jesus Christ: Philippians 1:6

And when he putteth forth his own sheep, he goeth before them, and the sheep follow him: for they know his voice.  John 10:4