One of the neat things about sending a weekly devotional is the people that I get to meet.  I now have friends who I have met only through correspondence.  (I’m always excited when my friends introduce themselves to me…whether it be Arkansas, Indiana, Tennessee, or wherever).

A couple weeks ago, I got the privilege to spend part of the weekend with one of my new friends, Sister Margaret Heilman, a widow in her eighties.

In 2020, Sister Margaret thought her life was over.  In fact, from July 4 until July 13, she knew nothing that was going on around her; she was in the hospital with Covid, fighting for her life.  Some of those dark days are still hazy in her mind.  However, she still remembers the isolation.  Her daughter in Ohio also had Covid and was not well either.

Death seemed to be a reality for Sister Margaret…except she didn’t die.  She felt frustrated.  “Lord, why didn’t you take me?  Why couldn’t I go on to heaven?”

God had other plans.  Sister Margaret finally recovered.  She went home and began to write, a life-long desire.  She wrote down her story for her children and grandchildren. 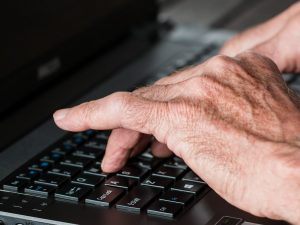 A story including the years she spent being raised by relatives.  She had felt like an orphan after her mother died, and the family who raised her had never treated her like they treated their own children.  She was not loved the same.  She had learned to put up walls as a coping mechanism.  Finally, she left home to live at a holiness boarding school.

She told of the years in ministry.  The years of her marriage and backsliding.  Of turning her back on God.  And then, the time when she came back to God and finished raising her three girls.

And brick by brick, Sister Margaret started removing the wall.

God began teaching her lessons and deepening her in ways that she was not prepared for!  She said, “Sometimes, I hurt so deeply that I just can’t seem to put pen to paper, to ‘expose’ the broken areas of my life.”

I sat in Indiana, listening to her story.  She cried as she talked about the ways that God was molding her and leading her.  And I was so proud of her!

She had no idea when she lay in the hospital, thinking that she was dying, that God was going to raise her up and give her a ministry writing devotionals for Herald Banner and Press.  She told me that she didn’t know that the devotional that would speak to the people the most would be the one that would cost her so much personally to write.  To open her heart so that others could see.  To be real and honest.

God is still opening doors.  She is getting an opportunity to speak to a group at her daughter’s church in Ohio.  I hope it speaks to them like it did to me and my family…that it’s never too late for God to stir your heart, to teach you lessons, to mold you into the image of Christ, and to tear down the walls around your heart.

The phrase in Fanny Crosby’s song has flooded my mind today, “When my life’s work is ended…”

One of these days it really will be over.  But until then, I don’t want to stop growing.  I am inviting the Lord to shape me.  I don’t want anything in my heart or life that displeases Him!  It’s never too late to grow.