Out of My Comfort Zone

“Elizabeth, you need to go down the street and talk to your neighbor,” my friend Sis. Donna Hazelwood told me. “I think she speaks enough English for you to talk.”

It seemed so straightforward to Sis. Donna. She didn’t know that I felt like a deer in headlights.

In the past year, we’ve gotten new neighbors across the street. We introduced ourselves and discovered that our new neighbor, Hugo, grew up in a small village outside of Ojinaga in Chihuahua, Mexico, just down a dirt road where the Manuel and Brenda Marquez family lived. This totally blew our minds! Seriously? A young man that these holiness missionaries tried to influence moved 858 miles away and ended up across the street from us! It seemed like a God-thing to us, and my husband, Todd, told Hugo just that!

Todd hauled pictures across the street to show Hugo. In 1986 Todd went with his “adopted” aunt, Sue Kimmel (the same one I recently wrote about who gave him a birthday party the summer his baby brother passed away), to Mexico on a senior trip. It was a trip that probably beat the trip that the seniors took at the Baptist school he attended. Todd spent a week with Brenda and Manuel Marquez in the very village where Hugo grew up. Later, he went back with his parents, getting rolls and rolls of pictures! What are the chances of that?

It has not been hard for me to talk to Hugo and his wife. They are often outside, and it’s easy to talk as we walk by. Their children play in my yard (their cats live on my front porch), and it is natural to have many conversations with the family. We have bought a couple action Bibles for the children and have gotten them in Sunday school and kids’ hour on several occasions.

Sis. Donna was especially excited to talk to Hugo’s mother who lived down the street. I don’t have as much contact with the people down the street, and I really don’t know this lady.

Sis. Donna had no idea how nervous I felt about it. I may seem bold to some people, but knocking on the door of someone I barely know scares me! I told my children, “After I knock, and she comes to the door. What do I say then? ‘Uh…uh…hi, I know someone you know.’” And being the great soul winner that I am (sigh), I’ve not made it down the street yet.

Then several weeks ago, my niece Brenda Palacios Smith contacted me with the great news that she has translated my devotional The Lord’s Dealings into Spanish. As I began checking permission for songs I quoted, contacting the publisher, having Jonelle Hill design the cover, and uploading things, it hit me…I can take the book to Hugo’s mom! I wouldn’t have to figure out what to say after “Hello.” I can make her a gift basket, tell her that I want to give her a devotional, smile, and then just leave if I can’t think of anything else to say. I am so excited!

Have you done something out of your comfort zone lately?

The Lord’s Dealings translated into Spanish 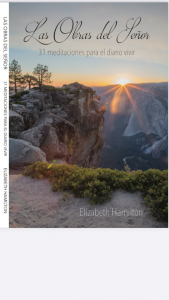