I was going slowly down the road, looking at the damage of the burned-out house down the street from me. As I passed, I noticed a bunch of things by the curb with a sign “FREE” nearby. I quickly turned left and went around the block. I wanted to get a better look at what had been drug out of this house. We had often wondered what all was going on there…things seemed suspicious. When I would pass, it felt like it housed drugs or a brothel.  Did a meth lab blow up and start the fire?  Then again, maybe my fears were unfounded.

We had seen the fire that had taken place a couple days earlier. The road had been blocked off by multiple emergency vehicles. Now, half of the house was burned out, and furniture was on the curb—broken wooden chairs, a dresser, and other items.

“I want that dresser,” I told my daughter. And since she has been around me long enough to be used to my impulses, she didn’t even hesitate. The dresser was black with fire damage and missing some drawers. I was so excited as we hauled it to the vehicle. Here was something that I couldn’t ruin! It was already in such terrible shape that I could experiment with it.  I had nothing to lose.

Before I painted my kitchen cabinets (that I told you about here), I started by painting bedroom furniture. I thought I would get experience with something that needed painted to get me ready for the harder kitchen job. Although my bedroom furniture started out in decent shape, I still felt like the paint transformed them. 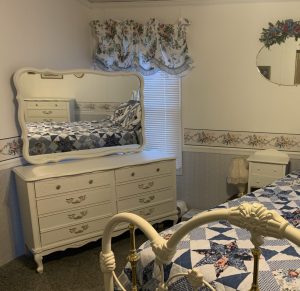 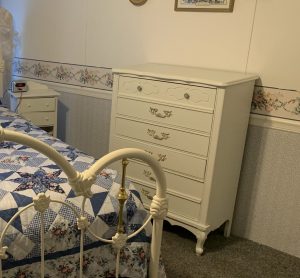 But here was a new project. What would happen if I sanded, cleaned, and painted this rejected dresser? Could it be transformed?

The fact that the dresser was missing drawers didn’t bother me at all. When I had researched how to paint furniture, I had seen some repurposed dressers…throwaways like the one in my vehicle. Someone had made a shelf where the missing drawers were and gotten baskets to put in place. By the time they had scrubbed and painted, I was amazed that it was the same dresser. Could I do the same?

My daughter and I opened the garage door and lugged my dresser in. By now, my mind was thinking of my husband. I knew that he may not have the same fond feelings for damaged, blackened dressers from potential drug houses.

Sure enough, not only was my husband less than excited, so was my oldest son. “Mom,” he told me the next time he was in the garage, “did you get that dresser from that drug house up the street? I don’t want anything from that house!”

“But Samuel,” I pleaded my case, “I want to redeem it!” I reminded Samuel about our church pulpit. Years ago, it was a TV entertainment center. My pastor found it somewhere and turned it into a pulpit. I have heard many anointed sermons preached from behind it. It has held Bibles. It has held the words as my church people sang songs that would touch my heart—songs that would stay with me all week.

My pastor has told us several times about this pulpit and how it was redeemed.  He said that it is just like his life. He was redeemed also. He ran away from God for years, even joining the army and going to Korea, trying to get away. Then in the army, he saw a young man on “reds” die in the barracks. He told himself that he would never take something like that, but before too many years, he was doing just that. He had a bad drug experience and found himself in the ditch off Cement Street, down the street from my house. As he lay in the ditch, the man who sold him the drugs wouldn’t even come check on him because he didn’t want to be implicated in case he died. By God’s mercy, Bro. Johnny did not die. Before long, God got ahold of his heart, saved him, and turned his life around.  Now Bro. Johnny preaches the gospel just blocks down the street from where this took place.  He tells us, “I owe something to this neighborhood!”

Last spring, after talking about how the pulpit and Bro. Johnny both had been transformed and redeemed, I told Bro. Johnny about how even my property had been redeemed. My friend Donna Caldwell used to stay with her aunt across the street. She said that the property where I live used to be a black VFW back in the time when things were segregated. She said that it was a wild place. Donna and her aunt would sit in the dark and watch through the blinds as people fought at the VFW. Sometimes the fighting there would get out of hand, and they would pull out guns and shoot at each other.

As I told Bro. Johnny this story, he got excited. “Your property used to be the VFW?” he exclaimed. “That may be where I got the drugs!”

What a transformation! When we moved in twenty-three years ago, we scraped the pieces of cement from the property and made a rock garden. 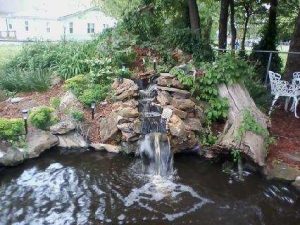 We have put a double wide on this property where we have met with God, read the Bible, and loved our family. There is no screaming, cursing, drinking, and hate. The very place where I live has been bought back. It’s been transformed!

I don’t know if I can transform that pitiful dresser or not. But I’ve seen God take some of my worst blunders and buy them back. Even this last weekend, I witnessed God turning around things that I bungled. I’ve been redeemed. Bill Gaither wrote, “All of my failures, His power redeems.”