Last month, my sister Rachel sent me a screenshot of my temperature and hers.  “30 degrees difference!” she exclaimed.

Sadly, I told her that I had been “totally completely absolutely” aware of that.  I had already looked on the weather map and had seen that we were hotter than Florida and areas down south. 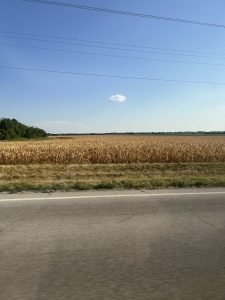 By that point, we had experienced a week or two of scorching weather and were getting ready for more weeks of it.  Every few days, the temperature would go down to the nineties, but most of the time, it was three-digit heat.

Rain would be in the forecast at times, and we would long for it.

When our ground gets cracks and the grass turns crunchy, we want more than a few drops.  We want a slow, gentle soaker.  The kind that gets down to the roots.  My husband thinks that is what will take care of the grass and bushes.  He says that sometimes a downpour will wash away quickly and not take care of precious roots.

But my pastor tells us that the farmers need the pouring rain.  Evidently that is what fills their ponds.

But for several weeks, we weren’t getting either—slow and gentle or torrential.

We’ve had our eye on some of our plants.  “I hope we don’t lose that tree,” my son said.

A man in our church has been scrambling to take care of his cows.  The grass is burned out, and he has been loading them up to take them down to the creek in shifts.

An older friend tells me that she doesn’t know if her crops can be salvaged.  She tries to freeze big expenditures until she finds out.  She’s used to this uncertainty.  She’s spent over ninety years farming in volatile Kansas weather.

In weather like this, it makes me think of Albert Barr reading the words of the prophet in the time of drought.  I can still hear him moan, “I wish it would rain!”

There are times that spiritual drought is a sign of a problem that needs corrected…disobedience…walking behind light…hidden sins…lack of carefulness in our life…even little things.

In these times, we search our hearts.  We want everything clear with God.  We don’t want anything clogging the path to spiritual blessing.

But Bro. Barr told us that sometimes seasons of drought are times of testing.  It might even be the result of sickness.  This time of dryness may be inevitable, but it can be dangerous.

Albert Barr said he saw people leave their convictions, standards, and the church in times of drought.  Things became muddy.  Mirages would appear.  The thirsty souls would see things in the sand that weren’t there.  “Over there is water!” they would say.  When they got “over there,” they would come up with a mouth full of sand but then head off to the next thing that promised water.

Surely all of us have experienced dry times…times when we were trying to get our bearings and hear God’s voice.  Times when the sun’s scorching heat were relentless.  Times when the grass was not flourishing, and the ground was cracked.

Whatever the reason, our soul has craved the Lord’s outpouring.  We have wanted the downpouring of a good service but also a good steady soaker in our spirit.

If there is anything in the way of the blessing, then God can show you.  But even if there is not anything in your way, you can hold on for the rains.  God has promised to send the rain.

Hold steady!  Look for the rain!  Don’t be satisfied by the lack of water.  Look up for rain!  “While ye are seeking me, I will be found!”

When the poor and needy seek water, and there is none, and their tongue faileth for thirst, I the LORD will hear them, I the God of Israel will not forsake them.  I will open rivers in high places, and fountains in the midst of the valleys:  I will make the wilderness a pool of water, and the dry land springs of water.  Isaiah 41:17-18