“Did you know that God hears and answers prayer?” Elma Jo asked her sister Jeanne in amazement. She had just come home from church and had heard things that she had never known before. There was a LIVE God who answered REAL prayers. Elma Jo, Jeanne, and their two brothers lived in a mid-western town in the United States in the 1930s and 1940s, but their idea of God was vague. They didn’t know that He was a power-working God!

They went on to see many prayers answered, and several of them found God. Sis. Jeanne Stailey lived a victorious life even though she lived with an unsaved husband. She found her niche—children! She had wanted to be a schoolteacher when she was younger. She and her mother had sold all their chickens to pay for college for her, but they had only been able to get enough for the first semester before they ran out of chickens.

This God-given desire of Sis. Jeanne’s was fulfilled in children’s ministry. Three generations of people were taught in her Sunday school classes, campmeeting services, and vacation Bible schools. Some of her lessons were unique—like the time she brought a coughing ashtray to children’s service and spoke on the dangers of smoking.

Some of her ideas were actually simple, like the one on eternity NEVER ENDING! As she stood and told the children about how time would go on and on, she held a Jacob’s ladder in her hand. It would flip one way, going click, click, click. Then she would hold it the other way, and it would all click down the line…as the children were all eyes!

She supported and “pulled” for these young people, wanting them to experience salvation and the reality of God for themselves. She was simple, unassuming, but always loving those around her with a passion.

She and her daughter Margaret (Stailey) Allen would spend weeks and months preparing for children’s services. You know how it is? Everywhere you go your mind is thinking what everyday things you can use for object lessons, how to get God’s truths across to the next generation, and how to connect and hold their attention.

When she was an elderly woman, she moved into a trailer park so that she could be in the same town with her daughter. One of the first things that she noticed was that children were running loose in the new neighborhood. She no longer was in charge of children’s meetings at church and camp, but God had brought the children over for their own Bible lesson! She told us that the parents probably wondered if she were a witch. But she won them over (like she did my father-in-law, my husband, and many others).

She’s in heaven now, but we still remember her spunk! I think we’ve told her famous “Willie the Mouse” story/object lesson almost everywhere we’ve gone. My husband Todd has changed details of the story, making it fit him. I think Sis. Jeanne would be thrilled if you did too!

Coming Soon! (as in…later this week)
The Willie the Mouse object lesson/story is included in a five-part theme called Traps. It can be adapted for Vacation Bible Schools, Youth Nights, Children’s Services, Monthly Meetings, and Kids’ Clubs. 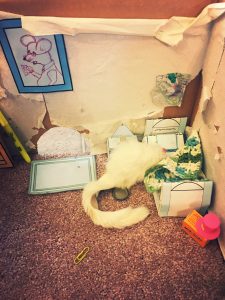 Check you email for your welcome letter! (Or spam folder)