A year ago, I rescued a dresser from the side of the road.  (You can read the original post here.)  The fact that it was so light and easy for me and my daughter to pick up and haul to my vehicle should have clued me in on its original quality.

It was probably not worth messing with! I’m not sure why it had such intrigue for me except that I knew I could not mess anything up.

This poor dresser did not start out with a pedigree.  It was not an Ethan Allen solid wood piece or anything.  Usually when people want to do a furniture restoration, they like to find a piece that has original great value that can be restored.

Not this dresser!  It had a particle board back and MDF drawers.  Then it suffered abuse wherever it lived for most of its life, I’m guessing.  It was serviceable but not loved.  It had scars, whether those were accidental or not.  Maybe it was misplaced anger.  I don’t know.

Then came the day of the fire that I mentioned.  The top, sides, and even the inside of the drawers were damaged.  The firefighters had put out the fire but also soaked part of the dresser in the process.  Then someone finally hauled the dresser to the curb. 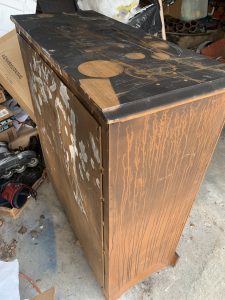 That’s where I spied it.  The day I saw it, I wasn’t troubled that it was missing part of its drawers.  I was so excited!  In my mind, I could see what I wanted it to be.  I know it’s crazy, but I loved that dresser from the moment I saw it, and I don’t know why.

Since it was filthy, I hosed the whole thing down, which is not a great idea since it had so much MDF board in it.  MDF swells and is ruined with too much moisture, and the poor thing had already come through the firemen’s hose.

Some of my family were concerned that if it really had been in a meth house that something could still be in it and would leach out…like into the air we breathe.  So I soaped it, scrubbed it with a brush, rinsed it, sat it in the sun, and then sanded it down. 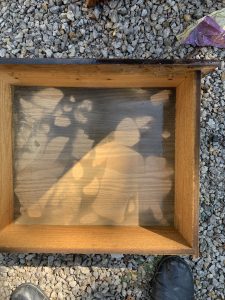 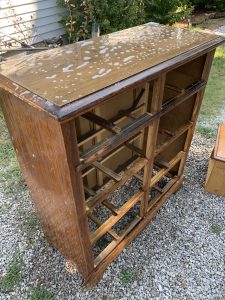 Then I got an oil base primer and gave it a coat.  At this point, I ran out of time to do more.  (This happens all the time in my life.  Sigh.)  I put the dresser in the garage out of the way.  For almost a year, this piece of furniture collected dust and just took up space.

I already had spent some time on the dresser, and it wasn’t worth anything!  It wasn’t one of the pieces with dovetail joints.  I realized, “The only value this dresser has is what I’ve invested in it.”

This last week, the time seemed to be just right to dig my dresser back out of the garage.

One of my children took a look at it and asked, “Now, why do you need that again?”

My husband, Todd, made comments also, so I said, “Ok.  Just haul this to the curb.”

By this point, my husband refused.  He helped me saw off parts to make a bigger opening.  We tore off the damaged nasty particle board backing and put some leftover beadboard on it.  Todd made a shelf with pieces of board that came out of our old church platform.  We fixed the sliders of the drawers and put on nice drawer pulls.

The whole dresser still looked rough, but I loved it!  I decided not to put more coats of paint on it.  If I had put more paint on it, maybe it would be a piece that more people would like when they come to my house.  Not everyone will like the style that I left it.  But I like it. 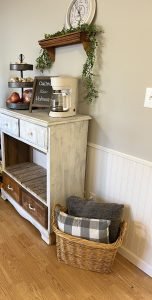 My doublewide only has four small drawers in the kitchen.  Only four!  I am excited about getting four more drawers to put in kitchen utensils.  The shelf can hold our crockpot and other things, so that everything is not crammed and hard to get to.  This is so useful to me!

In the mornings as I get up to pray before the house is buzzing with activity, I look at my dresser.  It has blemishes and problems.  It doesn’t fit in everywhere.  But I am so happy with it!

I told God that I just want to be useful to Him.  I don’t fit in everywhere, but I want Him to be pleased with me.  The masses may never get me.  I won’t please everyone…but I want to please HIM!  God has had an image in His mind all along that He wanted me to be.  He has been patiently working on me.  He has a spot picked out for me. 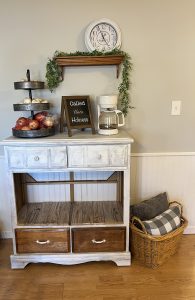 His smile of approval is what I want!  I’m only worth what He has invested in me.

Empty and broken, I came back to Him

A vessel unworthy so scarred with sin

But He did not despair, He started over again

And I bless the day, He didn’t throw the clay away