When God urges you to do something, don’t hesitate. I learned that lesson the hard way as a young Christian.

I had been a follower of Christ only a short time when the first of God’s “nudges” came my way. It was an inward impression on my mind that the God who had delivered me from sin, wanted me to do something right then. To tell someone about it.

In a public place I saw Ryan (not his real name), a wild, troubled young man who attended my high school. The Lord Jesus “nudged” me that I needed to go tell Ryan about my salvation experience and how God changed my life.

There was one problem. I was at a place a dedicated Christian shouldn’t be. Though I was young in the faith, I rationalized around the guilty feeling that came when I said I would attend this event with some friends.

And so I hesitated. How would Ryan believe me when I was at this place? I lost the chance. A short time later, the wild, troubled boy was shot and killed at a drinking party. My encounter with him may have been his only reminder to prepare for eternity.

A second nudge came one winter when I was teaching at a school in the mountains of Virginia.
It was cold, and the streets were covered with ice. Driving was treacherous and walking nearly impossible.

While driving up a hill, I noticed a haggard-looking young woman staggering up a steep, icy grade on the sidewalk. She was drunk; it was obvious.

“Stop and pick her up and witness to her,” said the nudge from God’s Holy Spirit.
I stopped and offered a ride to her place at the top of the hill. But the thought of witnessing to her went unheeded. “She’s so drunk she’ll never comprehend what I’m saying,” I reasoned.
And so the nudge went unheeded.

The story didn’t end there. A few weeks later, our pastor got a call to preach a funeral at our church. They needed an organist and asked me to play. 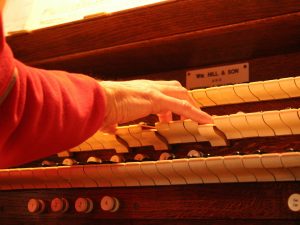 At the funeral, police escorted a young man in with shackles and sat with him on the front row. From my vantage point at the organ, I could see the anguish on his face.

Just before the casket was closed, the police took the prisoner to the front to pay his last respects. He threw himself over the casket, moaning and wailing. The deceased was his wife or his girlfriend.

I was one of the last to leave the church. When I peered into the face of the deceased, she was the same girl whom God had wanted me to speak to, a few weeks earlier. Another chance to make a difference in someone’s life—and I failed to respond.

In my limited way of thinking, I reasoned away two God-ordained opportunities to help souls prepare for eternity.

If the Lord Jesus whispers to you to speak to someone about Him, don’t miss the chance. It could be their last.

Thank you, Roberta Sarver, for sharing this week’s post.  Roberta was saved through the witness of a boy in her public high school. After graduation, he attended Frankfort Pilgrim College, the school that both of my parents attended.

Roberta says that this young man, Will Alexander “was a phenomenal athlete from Frankton High School who gave up an athletic scholarship to a prestigious college, to attend little FPC.  He is the one who witnessed to me, a worldly little snip of a girl, in high school.  It’s through his influence that I decided to let go of all the world offered me, and choose the old paths.”

Will Alexander has gone on to heaven, but his decision, as a high school student, impacted Sis. Roberta’s life forever.