I have a client who I help a few hours a week.  Recently, I have volunteered to pull some weeds for her.  I knew that she would enjoy having this done.  She is mostly housebound and spends hours looking out her windows at her flowers.

I am not very knowledgeable about plants.  I knew that if the job were being done by my husband, he would know the names and needs of the different flowers.  I barely knew enough to know what was a flower and what was a weed!

So, I decided to play it safe and pull only the things that I was certain were weeds, definite grass, and little tree sprouts on the loose.  Just sticking with the things that I knew, I had a huge pile.  The flower beds had been let go and were a mess!

I was distressed when I was pulling some of these weeds.  There were some of the intruders’ roots that had gotten so intertwined with the flowers, that as I pulled, both came up!  I quickly put the flowers’ roots back in the soil.  I had to be more careful.

I need help in caring for my children’s hearts also.  If it were up to me, I might get confused.  I might not know for sure what was a weed and damage something precious down in the heart.  In my haste and ignorance, I might get rid of the flowers.

The next time I went to weed, my friend told me about these horrible plants that were taking over her roses.  She didn’t know if I could safely pull them, so she told me to snip them off everywhere I found them.  She told me the name, and she immediately had my attention.  Morning glories?  I knew exactly what these were.  She wouldn’t have to describe these to me.

I went outside to eradicate all the morning glories, at her request.  I was chuckling to myself that what she found an intruder, other people found a thing of beauty.  Morning glories were some of my father’s favorite flowers.  He carefully had them on the backyard fence.  I remember him being so excited when they were in bloom that he came and got me out of the house to come see his prized flowers.

Later, I told my friend that I had taken care of the morning glories.  I told her how my parents had thought that our morning glories were so nice that they chose that backdrop for a photo shoot of me when I was young. 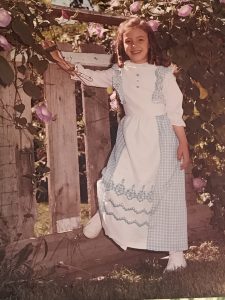 What one person thinks is a weed, another person thinks is fine.  I said, “I’m asking God to weed my heart.  I don’t want to have something that I excuse…an attitude, a conversation…that God wants removed.”

She snapped, “God may like morning glories, but I don’t!”

I laughed.  (Maybe she missed the point.)

I’ve gotten to know my friend who is in her nineties, so I am aware of many things that please and displease her.  I am determined to press closer into the heart of God.  I want to know what pleases Him better and better.  It’s not about me.  If it doesn’t please You, Lord, cut it out of my garden!

That I may know him, and the power of his resurrection, and the fellowship of his sufferings, being made conformable unto his death; Philippians 3:10

Let this mind be in you, which was also in Christ Jesus: Philippians 2:5