As a young woman in my twenties before I ever met the person who God had for me, someone else came into my life.  I had nagging thoughts that maybe everything was not correct in this relationship, but I overrode those thoughts.  My emotions got progressively involved with the young man.

Justifying ourselves is the very oldest scenario of the human race, starting six thousand years ago.

Finally, I came face to face that this was not what God had in mind for me.  I had to break up the relationship.

I’ll never forget what my friend Lora Tyler Elliot told me, “Cement is easier to get off of your fingers when it is wet.  After it dries, it is much more painful to scrape off.”

My son Samuel does cement now, and he says that you don’t usually have cement dry on your fingers.  However, I’ve noticed the care he takes with the little bit of residue on his hands when he comes home.  If he has any little cuts, the lime will get inside and start to eat away at his flesh.  Samuel takes care of this as soon as he gets home. 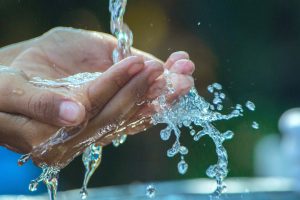 He will pour vinegar on his hands to neutralize the effects.  If he waits until the next day, the cement will have already started tearing up his hands.

My late pastor, Bro. Tommy Wade, used to tell us, “Don’t wait!  Run to God quickly when there is a problem!”

I have thought of this so many times the last two months.  The day that my daughter noticed that her calendar had stuck to the wall and pulled it back to find mold…that day was my wakeup call!

Another friend went up on top of the roof and looked around.  He said, “This looks great.  You have no hail damage.  You have no wind damage.”  Since this friend does contracting and also works as an adjuster for an insurance company, we knew he was knowledgeable.

We said, “Come in and see our walls.”

He took a special tool to measure the humidity in the walls—some of which registered 100% humidity!  He looked in the hole in the wall that the other friend had made.  “Oh, this is bad!” he exclaimed to my husband Todd.

Todd looked, seeing black mold up and down on the inside.  “Oh, this is bad, John!” he agreed.

We had a major problem!

Todd scheduled for our insurance adjuster to come look.  After a week or two, he showed up.  He also was not impressed that there was a problem when he stood on the roof.  Everything looked fine to him.

So, Todd took him inside.  When he saw the waterlogged, moldy walls, he said, “In thirty-five years, I have never seen a problem like this!”

But since the problem was obviously not hail or storm damage, our claim was denied.

We never would have found the problem if we had not torn the ridge cap off the roof and looked underneath.  That was the only way to know.

I think we need to be careful as holiness people or we can look good, all while having problems under the surface.

There were moments in the past six years since our roof was replaced when I would smell something—maybe a whiff of some musty air.  There were times that I would see something—a little discoloration by the ceiling.

Underneath the surface, something was not right, and it had allowed the water to get in.  Everything was being undermined, and if we had never taken care of the problem, we would have ended up losing our house and losing everything! 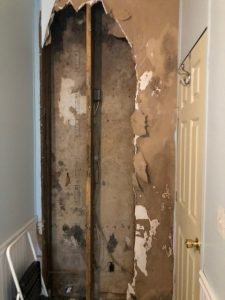 Someone said, “Why was this not taken care of six years ago?”  Six years ago, I didn’t realize there was a problem.  Everything looked great on the outside.

If we had any idea six years ago, it would have been so much easier to fix.  We waited too long for it to be covered monetarily.  The damage would not have been so severe years ago.

We waited because we did not totally dig into the small signs that there was a problem.  We trusted the little bottle of caulk.

God knows.  He knows our hearts.  He can take the roof off.  He can assess the damage.

There were walls, a couple in particular, that we were sure had a problem, but when we started tearing them out, we realized that they were fine.

God knows the areas to put his finger on and say, “That has to go!  That needs removed!”  He knows the hazardous things that need taken out.

Our ridgecap has been redone.  We did not want the walls to be destroyed again.  Protection has to be put in place in our hearts.  I am positive that God wants to place around me boundaries.  He wants to protect my heart.

It does not matter if very knowledgeable people stand on your roof and tell you that everything looks good.  If things are not right inside, then they are not right!  The issues of our hearts are easier taken care of when they first occur than letting the problem go on.

There is no need to bulldoze the house just because there is a problem.  People suggested to me to get a new doublewide and put it on the foundation.  Maybe there is an area of the country where double wides in great condition can be purchased for $20,000, but not where I have looked!  This is a house that I love that shelters me and my family.  It is my responsibility to fix what needs fixed as much as I am able.

My heart has this treasure.  It is my responsibility to allow God to look at anything that may be wrong and to take action where I need to take action.